When we last left off, I'd just Beat the Bridge. If you need a refresher, check out part 1 and part 2.

I was not the only one who had the idea to walk after mile 20. With my oranges in hand, I quickly reeled in a gentleman and a young girl who had speed walked almost all of the race. Apparently, the girl had not run more than five miles in training--yikes!--and the man was in his 27th marathon. I walked and talked with them for a bit before leaving them to push ahead.

Even at my walking pace, I seemed to be moving faster than others on the bridge. I celebrated with the other marathoners in passing that we had made it to the bridge, and all that was left to do was finish. Easy peasy. Soon, I hit mile 21.

Shortly after that, however, the buses were closing in the back of the pack. This was not supposed to be happening. It was definitely not part of my plan. An older gentleman ran up behind me and asked, "Did you hear what they just said?"

"They're trying to make us get on the bus."
"But we're on the bridge," I said. "Aren't we good to finish?"
"I'm not getting on any bus," he said, and we kept moving together.

Soon, the police cars had caught up to me, and a Marine was ushering my section of the pack to the buses.

And that's where my race ended. 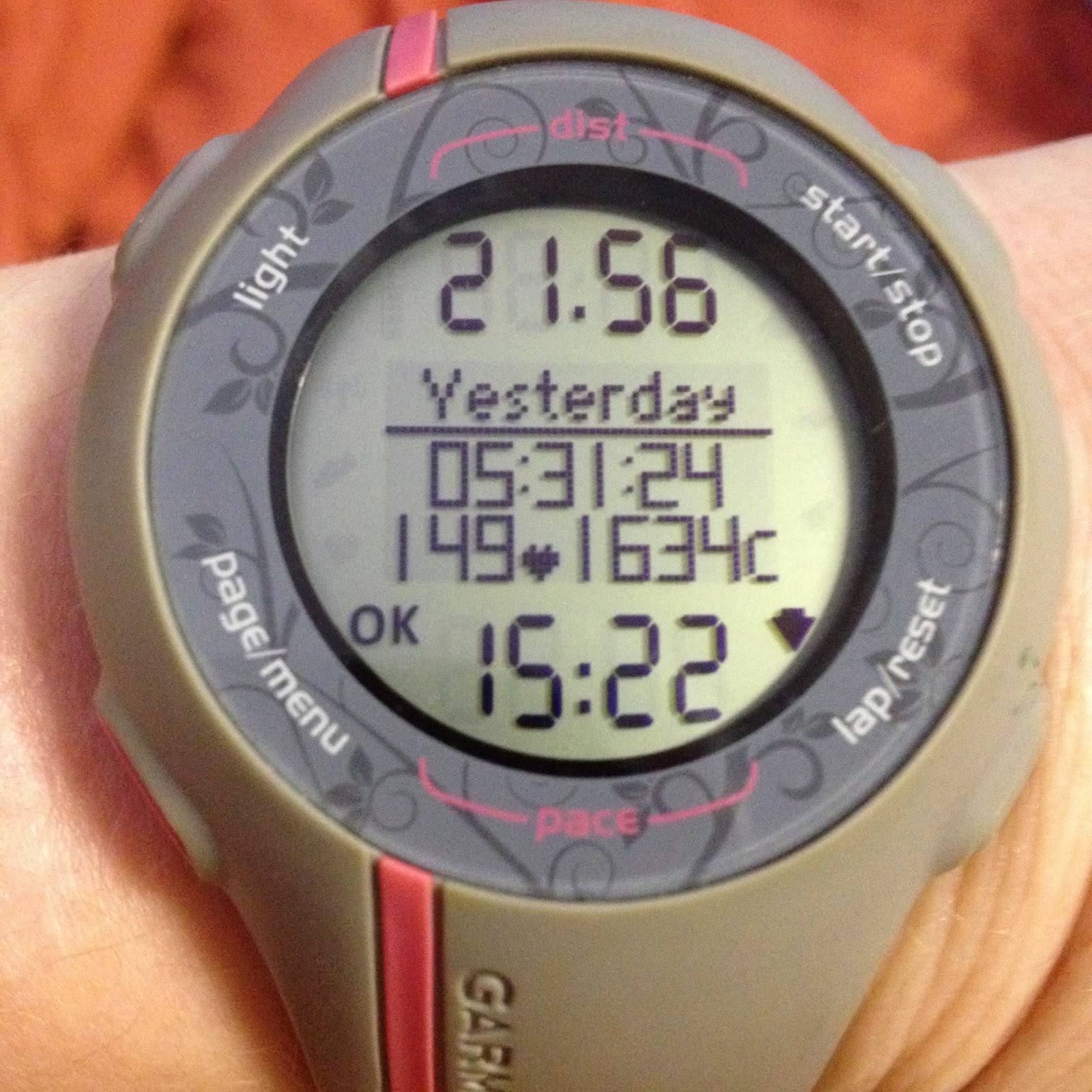 As I write, I have a hard time believing I surrendered as quickly as I did, but I turned to the bus, saw the "Straggler Bus" sign in the window, and literally hung my head. With a few other participants, I climbed on, stepped into the aisle, and saw the other marathoners who shared my fate. Before I even laid eyes on an empty seat, I started to bawl.

Immediately, the bus erupted in applause.

That, in a nutshell, is the marathoner community. People run their own races and their own paces, but marathoners support each other. Everyone on the bus had something happen that kept them from the finish line, but they were ready and willing to cheer on their fellow runners. Naturally, that made me cry even more.

One of the men near me, in typical "man trying to make a crying woman laugh" fashion pulled out his cell phone and showed me a picture of his six year-old daughter chomping down on a chocolate Easter bunny to make me laugh. He promised lots of cat pictures if I needed them. I exchanged stories with runners who had been on the bus since miles 13 and 14 due to injuries. Nobody was excited to be on the straggler bus.

The bus lurched forward, and I became a part of the slow crawl that I had feared for more than half of the race. We crept up behind the older gentleman who said he wouldn't get on the bus. Apparently, he kept going when I stopped to talk to the Marine. If I had to choose, the award for most ridiculous part of the race would go to what happened next.

The older gentleman ran away from the Marine. More than 5.5 hours into the race, his posture was weak at best, but he was a man of his word and was not going down without a fight. When I have told this part of the story to people, I describe the moment as equivalent to a monkey stealing a banana from the market. He knew he was being rebellious, but he didn't care. 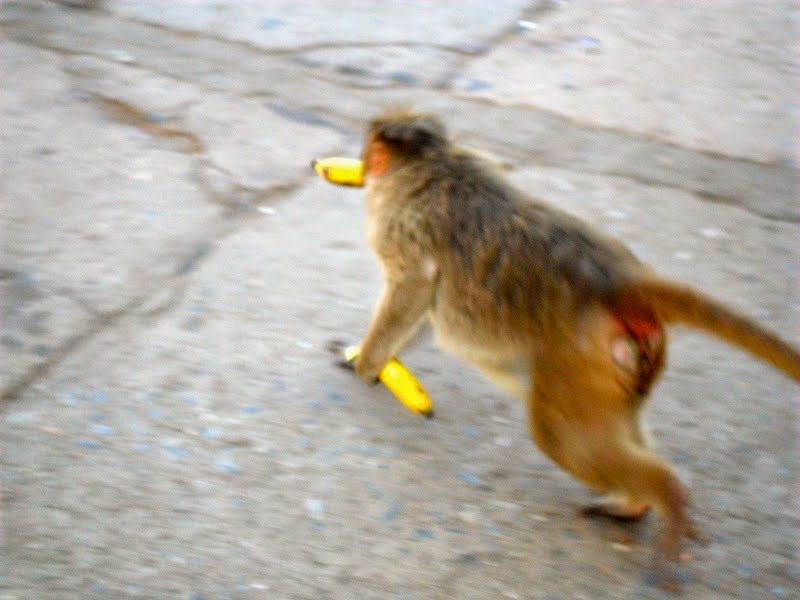 Before we caught up to him again, the straggler buses had filled up. There was nowhere for him--or any of the remaining runners--to sit on the bus, so we had to follow the rest of the runners slowly back to the finish line. All I could think about it the fact that if I had kept up my 0:20/1:00 intervals for one more mile, I probably would have been able to finish. Instead, I was stuck on the straggler bus.

My experience with the straggler bus would have been much different if everyone who was caught by the straggler bus had been forced on like I was. Because the straggler buses filled, however, I was forced to watch as people finished in more time than it would have taken me. Somehow, runners came from behind the buses and were able to finish. I guess they were in the bathroom when the buses passed them. I don't know. All I know is that people who were behind me were going to make it to the finish line, and I was watching them through the windows. When I was not crying, I was grumbling about how I was not injured, so I should be finishing the race with the people who came from behind me.

We literally sat still around mile 22 for what felt like ages. We had a Marine who was responsible for our bus--her name was Propes--but another Marine from the nearby aid station (Smith, I think) got on the bus to try to calm the angry bus riders. Propes had already offered us water and "this stuff"--CLIF gels that she had a box of for some reason--but nobody was soothed by that.  People were crying out for ibuprofen, but Smith couldn't give them that since he was not medical personnel. I just asked for a hug, which he gave me, and I cried a lot and didn't let go for a while.

Another down side to the bus was that no matter what, there was no getting off until the finish line. One couple on the bus was staying at a hotel right around mile 23, but they were stuck. That is, except for one guy wearing jeans and boots who finally had the courage to ask to get off the bus. (I am laughing out loud as I write this part.) I guess he had finally figured out that everyone else on the bus was part of a race. Confused, Propes asked, "You weren't running?" and when he answered in the negative, she asked why he was on the bus.

One of the other passengers on the bus commented that his attire made it pretty obvious that he wasn't in the race. I don't know how long he had been riding, but it must have been at least a few miles. Talk about respect for authority! After some consultation with another Marine, our friend was permitted to leave the bus and go back to not being a part of the Marine Corps Marathon.

The rest of the ride was long and painful. I am so grateful to the amazing people around me who shared their stories and offered support to me when empathy was the best possible remedy. I met a rock star named Michele who snapped this hot picture of us (that's GU on my lip. Cute, I know.) and added me to the Red Felt Running Club Facebook group.  Thanks to her, I survived the bus ride AND am a member of the most supportive running group ever. 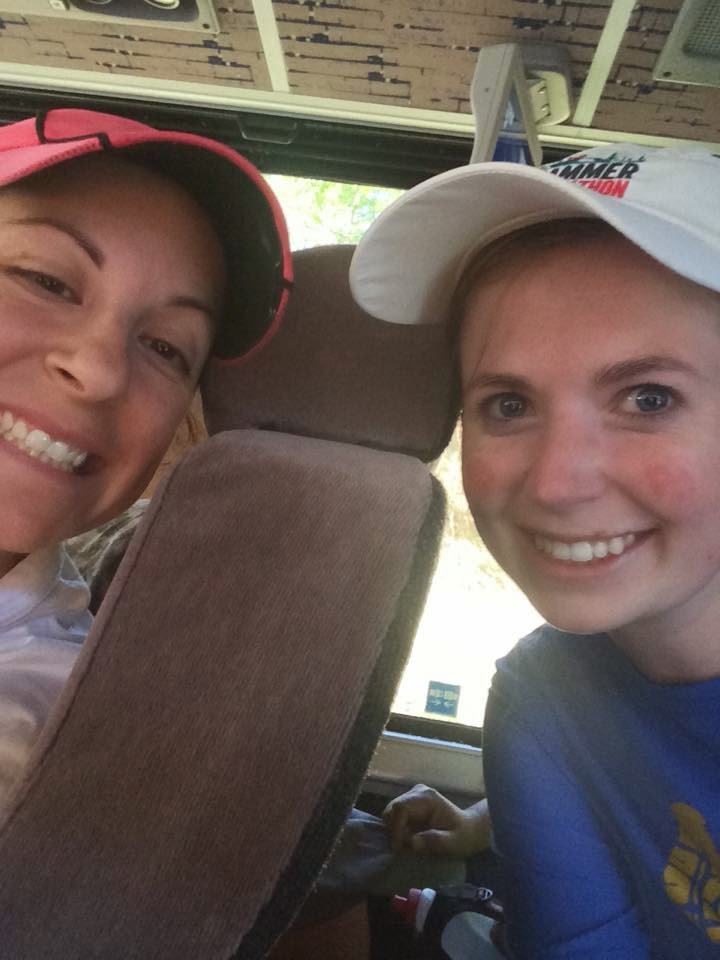 Michele even inspired a change in the horrible sign on the bus window. Several of the passengers were discussing how they didn't like that the sign said "Straggler Bus," so we improved it by taping a scrap of paper to the top and writing "Best" on it. Thus, we became the Best Straggler Bus. I believe we lived up to the name.

Eventually, I borrowed Propes's phone to call RWD. I told him I'd been picked up by the buses and asked where he was. He was at my team's tent; he had been waiting at mile 22 and seen the buses pass but not seen me run by. My phone call confirmed his fear that I had not made it. I told him to stay at the tent, and I would meet him as soon as I could.﻿

Up next: Marine Corps Marathon Part 4 of 4: Moving Forward
Posted by Unknown at 9:31 AM